After a discussion with a good friend we concluded that God is a metaphor for unspecified causality.

Let's unpack that a bit. The word "God" as we know it in Abrahamic religions is a metaphor for causal links that we do not fully comprehend. An example of such a causal link is that of a "sin" being linked to "hell". To "sin" is to be in one particular state or engage in an act that results in you going to a proverbial "hell". I am not referring to an afterlife but rather to a mental state. To "be in hell" is to suffer. "God" is the word we use to describe the (as of yet) unspecified mechanisms of reality that underly some causal links. When "God" is referred to casually, we can expand its meaning to be "ultimate reality": all mechanisms of reality. 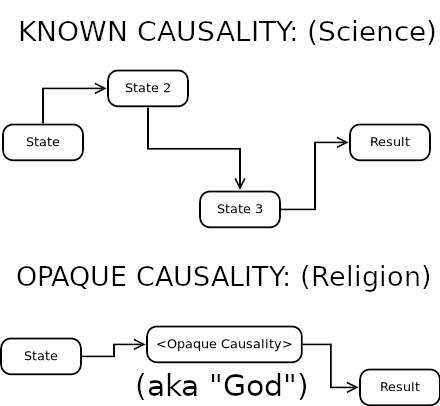 The seven deadly sins, ordered in terms of increasing offense are: Lust, Gluttony, Greed, Sloth, Wrath, Envy, and Pride. Being a sinner in any of these makes one approach a mental hell. We do not fully understand how these are linked to suffering, but cultures have refined their understanding of human psychology over thousands of years and have observed that these lead to hell. We have no other way of succinctly specifying these causal links other than to explain it via "God".

The wrath of God (Romans 1:18) "For the wrath of God is revealed from heaven against all ungodliness and unrighteousness of men, who hold the truth in unrighteousness;" tells us that one will suffer if one does not heed the causal links that have been discovered. If one for instance "angers" God by sinning, you will traverse the path to hell, and thus suffer God's wrath. God being angry is an anthropomorphization of the mechanisms of reality. There's no God as being, only as metaphor. (Psalms 7:11) - God is a righteous judge, a God who displays his wrath every day.

Thou shalt not kill is a commandment that is obviously desirable. Murder leads to fear of retribution, to revenge and wrath. To ceaseless conflict and suffering. Again, causing you to go to a proverbial hell.

Discard detrimental aspects of the self as stated in (Matthew 5:29-30) "If your right eye causes you to stumble, gouge it out and throw it away. It is better for you to lose one part of your body than for your whole body to be thrown into hell." This refers to properties of a person that cause detriment (or sin). An individual should attempt to rectify their being by casting away these properties. To not hold on to them once identified. If a person keeps their bad properties, then that will lead them to hell (suffering).

Do not avoid being corrected: (Hebrews 12:5) "And have you completely forgotten this word of encouragement that addresses you as a father addresses his son? It says, 'My son, do not make light of the Lord’s discipline, and do not lose heart when he rebukes you, because the Lord disciplines the one he loves, and he chastens everyone he accepts as his son.'" If one meets an obstacle due to the nature of reality, then rectify your behavior or mind. Do not think that God (ultimate reality) will adapt to you. You must adapt to it. This passage prevents struggling with reality. It teaches us to accept the immutable parts of reality.

Do not idolize: (Exodus 20:3) "You shall have no other gods before me." Idolizing causes you to lose track of ultimate reality (God).

In general there's a strong focus on an act and its resulting outcome. Explained via "God dislikes an act" is metaphorically telling us that the nature of reality, psychology, and civics is such that people engaging in certain acts will suffer in a mental hell.